as published by Conn/Selmer Magazine

I) Free left hand.
a) Left hand does not support flute as in the traditional method of “crunch and crutch” index finger.
b) Partial flute support comes from lip plate (inner corner near cork) resting on chin.
c) Partial support comes from the large muscles of the back, right shoulder and right arm. These muscles bear the weight of the flute in a position with the foot joint 10-30 degrees above the horizontal.
d) Flute is balanced on the right hand, not held.
e) Fingers – execute fingerings; not holding instrument.

II) Lips brought forward.
a) Lips are completely free from previous pressure exerted by inward push of left hand.
b) Intonation, flexibility and vibrato improve, as a result of support of flute not pushed into the lips.
c) Support of the flute is transferred from the left-hand index finger to the lip plate resting on the chin.

III) Flute is more centered on body; neck and torso are straight.
a) Results in better posture as in the end – blown flute, curved head joint flute, oboe, recorder or clarinet.
b) Hand position of left hand is perpendicular to the body of the flute as the clarinet, oboe, recorder, cello, bass or guitar.

IV) Support of flute in the “Balanced Method”
a) Assisted by the inward direction (toward the center of mass, of body) of fingers (left and right).
b) The use of gravity (10-30 degree angle direction) increases left hand ease.
c) The right hand support of flute is balanced by extending thumb at times towards the G# key.
d) Fingers work with ease and freedom since they only balance the instrument, not hold it.

V) Left hand is no longer overworked
a) In the traditional method the left hand is in a constricted and weight – bearing instrument – holding position.
b) In the “Balanced Method”, left hand fingers tough only the keys of the instrument.

VI) Flute vibrates freely for natural resonance.
a) The crutch index of the left hand does not touch the flute’s body, thereby resonance in close proximity to the vibrant headjoint is not muffled by the index finger.

Summary
In the traditional method the weight of the flute falls on the left and right hands. The hands are for executing fingerings 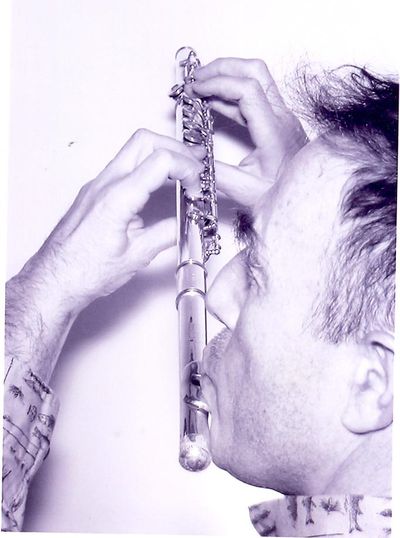 as required by the music, not for holding the instrument. Pressure from the unnatural “crunch and crutch” left hand pushes into the embouchure. This restricts its flexibility and its ability to move forward into an “ooh” shape.

In the “Balanced Method” the flute’s weight is held partially by the lip plate (end closest to the end cork) as it rests on the chin. This is because of the higher than horizontal position of the foot joint. The large muscles of the right arm, back and shoulder hold the flute. The fingers and lip plate only balance the flute. The flute rests on the right hand, balanced at times by extending the right thumb toward the G# key for a wider distribution of weight. The lips are free to move flexibly as the cheeks are loose to resonate and vibrate with no inward push of the left hand.

Steps to Flute Balance
1) Stretch the right back, shoulder and right arm muscle by extending arms, hands and fingers above head (hold, stretch, and relax)
2) Practice overtones (harmonics). This will musically raise the right hand to a position higher than horizontal.
3) Play with lips in an “ooh” configuration and chin forward and down.
4) Balance on right thumb where skin meets nail on the side. Slide thumb toward G# key as needed.
5) Allow the left hand pinky, when not needed and if comfortable, to drop below the plane of the flute.
6) It is possible to extend the left hand pinky and right hand thumb to such a degree that they touch, balancing left and right hand as they fuse into one.

Summary of Developmental Procedure
The flute rests on the right hand with a wider distribution of weight. Extend right thumb towards the G# key. Hands balance the flute as the lip plate supports it. Strengthen and stretch back and arm muscles, extend arms, hand and fingers above head as much as possible [hold, stretch and relax], practice overtone and harmonics. This will bring the foot end of the flute higher than level. Practice with kips and chin in a forward position developing a loose, buoyant, flexible, and centered embouchure.

Balanced Flute Technique in Marching Band
a) The peripheral vision is balanced left to right. Peripheral vision is impossible with a severely tilted head.
b) The head is straight as all other marching band instruments.
c) The appearance of the flute line is one of intensity replacing an out of kilter flute line with heads tilted at various angles.
d) Execution of turns and alignment are improved when the head is not tilted and one can align the verticals (files), horizontals (ranks) and the diagonals.
e) (Reminder, probably working with children) The large muscles of the back and right arm along with the lip plate support the flute, not the hands.

Playing into a Microphone
a) Flexibility of numerous positions is critical when playing solos into a microphone.
b) It is even more critical when reading and getting close enough to project the low register.

The Great Flutists employ this method in part
Baker’s loose and vibrating cheeks
Rampal’s LH pinky below flute plane, for greater counter weight leverage
Galway’s use of LH pinky on G# key when not effecting pitch 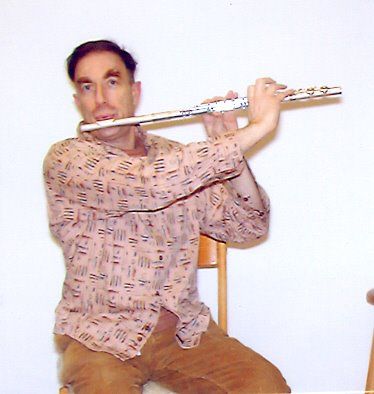 The Advanced Method
Hands are crossed. Flute is held to the left side rather then to the traditional right.
a) This will immediately center the embouchure resulting in a balanced use of the facial muscles. Flutist embouchures are predominantly set off to the left. It is though that the air needs to cross the tone hole and in addition be projected down the instrument column. Flexibility in large leaps will develop as a result of muscles working in pairs from opposite side of the face. Not only will the tempo increase but also in the modern world of video close up a centered and balanced view is much more attractive.
b) This will offer corrective realignment for the torso and hands from years of unbalanced position. The flute is traditionally held to the right because the key mechanism is laid out in that manner. View pictures of Renaissance transverse flutists and

you will see that the instrument is played from either side.
c) Finger technique can be viewed in the mirror from the opposite perspective. The flutist sees the palm side of the left hand and the outer side of the right hand. This opposite viewing perspective is so beneficial in refining an accurate, close and tight technique.

Intermediate Balanced Flute Method
Hands are crossed. Piccolo is held to the left side rather than to the traditional right.
a) This will immediately center the embouchure. Flutist embouchures are predominantly set off to the left. It is thought that the air needs to cross the tone hole and in addition be projected down the instrument column.
b) Finger technique can be viewed in the mirror from the opposite perspective. The flutist sees the palm side of the left hand and the outer side of the right hand.

Reality Check
It is difficult to play the free left hand one hundred percent of the time. It can be a goal in practice and performance. It can be an alternate position. The more different ways we use the various muscle groups toward the end result of great flute playing, the longer the life of your playing. No particular muscle group or position/contortion is overworked.

Health
Flute playing should not be the cause of poor health. The more positions in which you are able to play, the less overworking of any particular muscle group and the more positions are possible for posture variations. At the end of a playing session you are most certainly tired, but in a balanced and focused state. No lopsided embouchure, blurred, pop – eyed vision, strained crooked neck, crooked spine, enlarged heart, cramped left hand and arm.